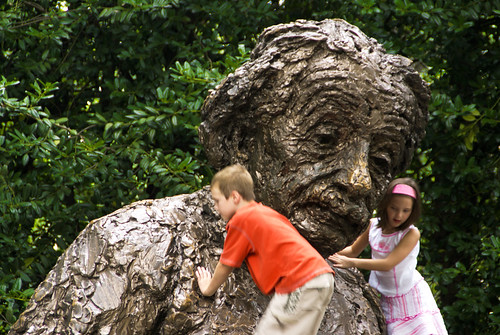 How you can be the genius at your work

If you want to become a true genius you are in for a bit of a sore reality shock. Its not going to happen. True geniuses that are remembered as true geniuses are often born with a spark and they exhibit the qualities early in life. It is not often that a 30 year old at a desk job becomes a genius all of a sudden.

Now you know the trick. To be a genius at work you do not need to be Leonardo Da Vinci. You need to be “perceived” as a genius by the others around you. A genius, after all, is a relative term. If the other people at your work are lazy, slow and careless you will be able to become the work “genius” with nothing but a little bit of extra preparation!

Now that you have faced facts and realized that you are never going to be a genius if you aren’t already you need to look at ways to be more like a genius. One can increase ones intelligence and perceived intelligence by emulating the greats of the past.

NOTE – This post might upset some people. If it upsets you it is likely that you are living a lie. There is nothing wrong with being of “average intelligence”. If you are trying to be smarter for anything other than academic purposes it is likely you are trying to be somebody you are not. This is not something people will respect you for. Be yourself. Most of the greatest people in history had other qualities other than intelligence – compassion, love and determination.

1. Read the news
If you read up on the current news, especially the news relating to your industry, you will be able to make recommendations that are current and up to date. They will seem inventive and cutting edge. It also allows you to relate what is going on in your company to what has happened to other companies in the news.

2. Study history
In the same light as number one if you read history you will seem learned and more able to make inventive suggestions. People are able to change the future by understanding the mistakes people have made in the past. The greatest fools are the ones that do not learn from history. Do not be like this. Make sure you study the history of your firm, company, industry and nation.

4. Work damn hard
All the geniuses throughout history have been hard workers. It is a mistake to think that smart people are just like that naturally. They work really hard. Leonardo hardly slept because he was working so hard. The same goes for everyone else.

“If I have ever made any valuable discoveries, it has been due more to patient attention, than to any other talent” – Isaac Newton

5. Be patient
Monks will spend years in solitary retreat to make a simple realization. Nelson Mandella spent years in a prison where he was able to reflect on certain injustices and formulate a way to change them when he got out of his cell. Likewise, insight and cleverness takes time. If you need to solve a problem at work you need to give it time and attention. Do not be turned off if you do not make a break-through right away.

“I keep the subject of my inquiry constantly before me, and wait till the first dawning opens gradually, by little and little, into a full and clear light” – Isaac Newton

6. Relax
Nothing will ever come from a tight mind except for more tightness. The greatest moments of clarity happen when one is relaxed. However you relax it is important that you do that when you are “trying” to discover something new. The more often you are relaxed the more often these breakthroughs will occur.

Sometimes, all it takes is mustering up the streng

Monday is coming! Don't beat yourself up if you ca

Thinking about our life's ifs and but's is a two-e

Choosing yourself above anything else is not an ov

This cute furbaby is stopping by your feed to say

There's nothing wrong with taking care of yourself

How I wish we can get more healthy just by looking