The Scariest Place on Earth: How to Conquer Your Fears & Develop Bravery 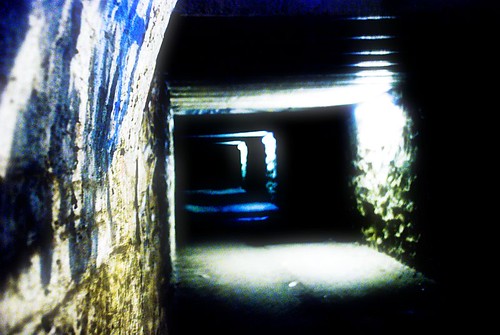 “Bravery is not the absence of fear, but the mastery of it.”

Today I’ll share these events in the hope that they might help you conquer your fears and develop some real world bravery.

Why I used to be afraid: the effects of my father

When I look back to my childhood, high school days and early adulthood I see that I wasted a lot of time being afraid. The fear was complex and multi-layered – diseases, death, punishment, lost family members, change, war, etc. I was afraid of a lot of stuff!

If I think about it with my “adult hat” on I reckon it probably had a lot to do with my father. He was a bit of drinker and while he was a good man (for the most part) he did do a lot of things that made my siblings and I fearful people. Things around our house were never stable or secure. We were always worried about what state he would come home from work in, and how he would react to our behaviors. It was touch and go for a long time.

A quick look at any psychology textbook will show you that a huge majority of our neurosis’ come from our parents and the way they taught us to cope with things and the way they brought us up. But do you know what the biggest way they influenced us was? It was the way they themselves behaved and lived. Their example. A child’s impressionable little mind picks up everything. Every fight with mom, every bad day at work and every bad vibe. Everything. And these impressions stay with us for the rest of our lives or at least until we are mature enough to start changing them.

A lot of my fear came from my father because he lived his life in fear while I was growing up. I can’t remember a single example where my dad taught me about bravery through his actions. I think thats why I was afraid for a long time. It was all I knew how to do.

What are you afraid of?

Do you have a lot of fear in your life? Are you not as brave as you should be? Some common fears include:

The lessons I learned at the scariest place on Earth have helped me with all of these fears. I now have a set of tools I can use whenever fear rears its ugly head.

Conquering fear at the scariest place on Earth

Picture this. You are in place that has the highest crime rate in the world outside of Iraq. A place where you can’t go out after dark because bandits will rob, rape or kidnap you. A place where 55% of the Government officials are convicted murderers, rapists or fraudsters. Picture yourself as a young white boy with curly blond hair. Picture yourself stranded there at 3am while hundreds of onlookers peer out from behind their scarf-wrapped faces wondering what the hell you are doing there.

That’s the situation I was in straight out of first year college. My first overseas trip. I was sure it was going to be my last.

Standing there with two massive backpacks watching the train depart the station at an alarmingly fast pace I realized I had two choices. I could panic or I could be brave. At first panic seemed like a good idea. After all, the heavy breathing was happening quite naturally – all that I had to do was introduce some screaming and the panic would be complete. But as I thought about all the things that I wanted from my life, namely living it, I decided that I would be brave and get myself out of this situation.

Here is what I did and recommend you do if you want to overcome fear:

Calm down
The first thing I did once I decided I needed to act was pick up my bags and find somewhere I could sit and calm down. I chose the public toilet. Due to the fact that I was already feeling nauseous from the fear this was not the most intelligent of ideas. It was smelly. But, the toilet gave me a locked door and a private space to sit and calm down before I moved on next.

If you have a lot of fear the first thing you need to do is settle your mind. If you are panicking and fearful you will not be able to move on to the next step so it is extremely important that you find a way to calm yourself down.

Get help
Once I had calmed down enough I decided that I needed to get some help. This sounds simpler than it actually was. In a place where the police are often responsible for a lot of the crime I realized that getting some good advice was going to be tricky. So who could I trust? I scanned the train station for ideas: the 30 year old man with a leather jacket and gold watch? Nope. The hermaphrodite selling drugs? Nope. The old guy with the tea stall? Bingo!

I don’t really know why I chose this guy. I think it was because he reminded me of my grandpa. He looked worn from hard honest work and probably supporting a family. He had his tea stall open at 3am after all. I walked straight up to him, handed him a big wad of money (not worth much back home) and asked him in my politest voice to help me find my way to my destination motel without getting kidnapped. It worked. He gave me step by step instructions that proved most useful.

When you have a lot of fear it helps if you can get some more objective information. Fear often clouds your judgment and makes it difficult to choose the best choice of action. You might have a mental image of a brave person just running in to a seemingly hopeless situation in order to save the day. I am betting they wouldn’t do this unless they had information or knowledge telling them their odds were good. Being brave doesn’t mean being stupid. Part of being brave is knowing when to ask for help.

Trust yourself
Once I had the information from the tea stall owner I had the sudden realization that it was now up to me. He had given me the tips that I needed but he wasn’t able to take the frightening journey for me. No matter how much I wanted to pinch myself and wake up from this nightmare I realized that it was up to me and me only to get myself out of there safely. And to do that I had to trust my judgment.

So I started walking in the direction the man had told me to go. If I came across some people that didn’t look right I just trusted my intuition and changed my route. If someone tried to lure me in to a car or offer me a ride I ignored them. It was working.

If you want to conquer your fear you need to trust yourself. Doubt is not going to get you anywhere. The bravest people always back themselves in every situation because they know there is no one else they can really truly rely on. A big part of overcoming fear is trusting that you know the best thing to do for your own situation.

Making it to the hotel

99.99% of the time your fear is unfounded. It is unnecessary. This was true of my ordeal in the scariest place on Earth. The drama was in my mind, not the outside world. I made it to my motel safe and sound and wondered why I had stressed myself out so badly over nothing.

Isn’t that what always seems to happen…

Life is extremely short. Statistically we might get 80 years but many of us get much less. When you look back on your life you will regret nothing more than having missed out on certain experiences because you were too afraid. It is even more bitter when the fear was unwarranted or illogical.

I hope something in this article might help you overcome your own fears. I would love to hear about your fears or how you have overcome them so please leave a comment if you have the time. It might really help someone.

49 thoughts on “The Scariest Place on Earth: How to Conquer Your Fears & Develop Bravery”

6 Ways to Remind You of the Happiness of Single Life

Think for Yourself: Why Being a Conformist in Life is Dangerous

The Guide to Developing Self-Discipline That Lasts

11 Quotes to Help You With Trust Issues