An Eye for an Eye: What Gandhi Can Teach You About a Happy Workplace

On my first trip to India I encountered the man called Mahatma Gandhi. This man is everywhere in India. He has streets, buildings and airports named after him. There are posters of him in cafes and police stations.

I wondered who he was and why he was so popular and I began to study his life-story. I soon realized that he was going to change my life exactly as he had for the people of India. The man was truly incredible and he has a few things to teach you about your workplace.

So who was Gandhi

Before I tell you how this great man can help you have a happier work life I thought it would be good to take a brief look at who he was and what he stood for.

Mahatma Gandhi was born in India on the second of October 1869. He is considered the father of India because he helped free the Indian’s from British rule through the principles of non-violence, tolerance and compassion. He inspired movements of human and civil rights all across the world.

His early life was spent studying to be a barrister which he simply hated. He was married by 13 in a family made arranged marriage. He learned about vegetarianism and non-harming from his parents and relatives. At 18 he moved to London to study Law. Before he left he vowed to his mother that he would avoid meat and alcohol.

He later spent time in South Africa where he suffered many acts of violence, racism and bigotry. It was here he developed and worked for civil rights for Indians as well as developing his own ideas about justice and truth.

He worked for decades in India working for increased rights for Indians and independence from Britain. In everything he did or stood for he stressed compassion, truth and non-violence.

He was finally murdered by a religious extremist on his nightly walk in New Delhi.

To get a full picture of his amazingly inspiring life you should read his autobiography which will without a doubt have an amazing impact on your own life.

What Gandhi can teach you about happiness at work

So many of Gandhi’s teachings and life stories can be applied to our own lives and can help us find meaning and strength. Gandhi endured a lot of hardships and if we study those hardships we can derive the same truth from them that he did.

“Freedom is not worth having if it does not include the freedom to make mistakes.” – Gandhi

It is important to realize that it is okay to make mistakes at work. We learn from mistakes and these mistakes make us better workers. No historically great person has ever achieved greatness without making mistakes. If you worry about mistakes and errors you will stress yourself out.

One of Gandhi’s most important lessons was that of tolerance and understanding. Throughout our lives we will be in workplaces with people we really don’t like. We will be part of arguments and we will be pushed to take sides in political arguments.

Gandhi urges us to look at the sin and not the person. The next time someone yells at you at work it is important to develop love for that person as opposed to hating them. Realize that the person who is doing the yelling is unhappy and that is why they feel the need to yell.

“It is unwise to be too sure of one’s own wisdom. It is healthy to be reminded that the strongest might weaken and the wisest might err.” – Gandhi

People do not like being around arrogant people. It is particularly annoying when you have to work with them all day. We have all worked on a project with a team of people where someone is trying to run the show and putting down everyone’s ideas.

Your work will be a lot happier if you take on a humble personality. You will be more popular and people will be more likely to listen to your ideas. You will also learn a lot about yourself.

“The weak can never forgive. Forgiveness is the attribute of the strong.” – Gandhi

Often times you will be involved in arguments at work and things will get heated. Or, you might be out for Friday night drinks with everyone from the office and someone says something offensive while they are drunk off their tits. It is in these times that you need to learn to forgive. Being the bigger person in situations like these allows the tension to dissipate and you will be able to get on with your work in a happy and stress free manner.

“You must be the change you want to see in the world.” – Gandhi 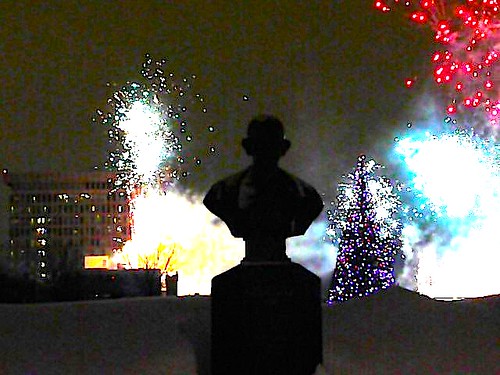 photo credit: Rev. Santino
This quote is probably the most famous thing that Gandhi ever said. It has inspired millions of people worldwide to do something significant with their lives by instigating changes.

“An eye for an eye makes the whole world blind.” – Gandhi

Do not seek to get revenge. If someone gets promoted past you there is no point in holding it against that person. They are not to blame. You yourself are to blame for having unrealistic expectations.

This quote from Gandhi shows us how poisonous thoughts of revenge and retaliation can be. It is important that we strive to solve workplace problems with compassion and peace.

“A ‘No’ uttered from the deepest conviction is better than a ‘Yes’ merely uttered to please, or worse, to avoid trouble.” – Gandhi

Sometimes we say things just to please people. Sometimes we think that a white lie is better than the truth because it will help us avoid a nasty situation. But these situations are where we need to step up and be honest. 9 times out of 10 that white lie will come back to bite us in the butt as we are not being true to the other person, or to ourselves.

“Each one has to find his peace from within. And peace to be real must be unaffected by outside circumstances.” – Gandhi

We must understand that true happiness comes from mastering one’s thoughts and mind. It does not mater what is going on around you, if you have mastered your mind you will not be affected. If, however, you have not mastered your mind you will always be blown around by the winds of change in the workplace. Even a slight discomfort can ruin your whole day. Strive to find peace from within.

6 thoughts on “An Eye for an Eye: What Gandhi Can Teach You About a Happy Workplace”

Printer Problems: A Video Guide to Dealing With Printer Stress

How to Let Go of Ego in Relationships

The Physical and Mental Benefits of Houseplants